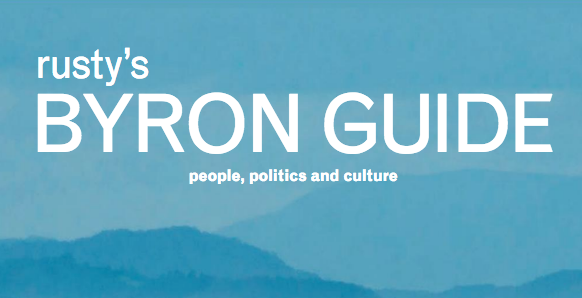 Every year, Rusty and Tricia Miller put together a little guide to Byron Bay. It’s full of places to go, where to eat, maps and so on, but more than that, it’s a call to arms to preserve the Shire’s magic. Political, thought-provoking and unafraid, Rusty’s Byron Guide has become a part of the bay’s scenery, stacked in piles at festivals and sitting in coffee shop windows since 1984.

The 2018 edition has a bit of space for a feature Rusty and Tricia asked me to write about my namesake, Alexandre Dumas. The author of swashbuckling page-turners was a gourmand and a spirited one at that, opposed to foie gras and pro-organic way before ethics and food became so loudly entwined. He also happened to love the sea.

“Oh sea, the only love to whom I have been faithful.” It was Lord Byron, appropriately enough, who wrote those words. But it was another writer, Alexandre Dumas of The Three Musketeers and The Count of Monte Cristo fame, who fancied them as his life motto – and who tells us about his love of the ocean (and women) and its sealife (mostly dead and buttered) in his epic cookbook, the Grand Dictionnaire de Cuisine.

The author of swashbuckling bestsellers, it turns out, was also a dedicated and curious gourmand and bon vivant – in his 1150-page opus on food, Dumas regales readers with stories of omnivorous kangaroos that drink wine and brandy, a war that started with the bite of a fig and the merits of ostrich eggs. He includes in his “alphabet for food lovers” a recipe for bamboo pickle that “agrees only with people of phlegmatic temperaments” and approaches bear, nightingale, dog, frog and flamingo egg with equal gusto. In the ‘O’ section of his culinary A-Z, he tells us how to make strawberry omelette next to a lament for the sensory-deprived oyster and excuses himself for using the word “dribbling” (context, dear initiated gourmets). He avoids foie gras because of the tortures geese are put through for the sake of the delicacy and fondly remembers sipping violet syrup in nursery.

Dumas wrote about food for the love of food, but even 150 years ago, his choices were dripping with values and circumstance. What we eat has always been influenced by more than our hunger but instead of once indicating little more than where we came from, food has become a quagmire of upselling, misinformation and fashion. It’s become political, it’s become obsessive, it’s become bankable and it’s become distracting.

Take TV cooking shows, or our coffee culture – when early surfers came to Byron Bay’s quiet working-class community, exploring its empty waves and planting roots in its even sleepier hinterland in 1970, there was one place where they could find a coffee. At Ryan’s Cafe, International Roast simmered on the wood-burning hearth and cost a lot less than $4.50 a cup. There are now more than 70 cafes locally and buying a coffee is not the simple act it once was. And so, with apologies to the other Dumas, an alternative A-Z of food:

B is for Blogger. With the internet has come the rise (and I put my hand up here) of the citizen critic and the constantly scrutinised kitchen. Name a chef who loves a food blogger.

C is for Coffee. Dumas spoke of its origins and how adding milk was a matter of taste. What we now have is blanket, near-religious dedication to hot milk with espresso – a drink that the Frenchman might barely recognise.

D is for Definition, self-definition. It’s been this way forever: every part of cooking is part of a process by which we shape who we are, who we want to be – and who we’re not. D is also for delivery (of lukewarm pad Thai).

E is for “Excellent vegetable” – which is how Dumas describes potatoes. Less meat and more vegetables on our tables is, the author might agree, an excellent thing.

F is for Fast. Antidote to the Maccas strips of Australian suburbia, Byron Bay is lucky enough to have access to growers, makers, markets and cooks whose priority is squarely on the land, real flavours, the future and taking it slow.

G is for Gastric band (not gluten-free, although intriguingly Dumas does give instructions for squeezing gluten from onions).

H is for Hummus, the flag-bearer for every wonderfully diverse flavour and dish that have now become part of the way we all eat, every day.

I is for Infertility (of the land) and intolerance (of foods that were once just foods).

J is for Jack’s as in Hungry Jack’s. Because for every pricey new food fad are millions of families relying on fast food for an affordable hot dinner.

K is for kangaroo. Dumas goes for broke with foods we’d now consider, let’s say, ethically challenging, despite some of them being on our back doorsteps. It’s funny how we’re more connected than ever and so now have access to whatever we feel like for dinner, yet we eat a more limited selection of animals and parts of those animals than we once did.

L is for Learning. Paying attention to the origins and impacts of what we eat is probably the only way to change habits for the better, which is easier than it sounds given the mysteriousness of so many highly processed foods.

M is for Markets, not super or mini, but the way brilliant growers and producers come to our meeting places to sell their hard work.

N is for No, thank you. Communities can and do question the corporatised way of buying and selling food in favour of fresh, seasonal and local.

O is for Organic. He picks violets from woods, drinks cool spring water and eats young wild boar, yet I haven’t found a mention of the word ‘organic’ in Dumas’ A-Z – and that is refreshing.

Q is for Quantity. See A and R.

R is for Regular. As in size. There must be a good reason why it is not standard practice for restaurants to offer all meals in different portion sizes, thereby cutting back on waste and adding value…

S is for Single origin, superfoods and the silliness of food-meets-fashion.

T is for Throw away. Let’s forget paper cups and takeaway containers and instead slow down and eat in – or Carry Your Own.

U is for Unicorn. Also, uniformity. Tuna/salmon. Chicken breast/steak. There’s a lot out there but we tend to eat the same things, cooked in the same ways, day in, day out.

V is for Values. What, how, where and why we eat matters. Perhaps we eat in protest, drink to send a message and buy groceries as activists, or perhaps our food choices are not nearly as important as all that – but in some small way, what we cook and eat affects someone, somewhere.

W is for Water. Not the bottled, shipped stuff, but what’s under our noses – and how we must protect it.

X is for X-ray … Well, it was either that or xylophone.

Y is for Youth – and you. Because all this starts when we’re tiny and, at its most unadorned, is about only one thing: fuelling ourselves. At its best, it unites.

Z is for zest, as it was for Dumas and as it is for Byron Bay. Amid the noise, we could do worse than reminding ourselves that we eat to live and not the other way round. Let the town be filled with laughter, with love and with a zest for life beyond our next meal – after all, above everything he ate and drank, Dumas’ one true love was the sea.